The Joint Research Center Zeeland (JRCZ) is the first milestone in a comprehensive plan that will lead to a science campus, part of the Campus Zeeland programme. The construction of the research center at Het Groene Woud in Middelburg is preceded by years of talking, thinking, drawing up a solid vision for the future and a lot of lobbying. “The ambition will soon shine through,” says Margriet van Groeningen of Campus Zeeland.

Campus Zeeland is a term many people in Zeeland have heard of. It is the name of a partnership of companies, knowledge and research institutions and governments in the province of Zeeland. It arose from a be-stronger-together idea at a time when a number of educational institutions in Zeeland experienced major challenges, partly due to the way the government financed them. Zeeland was given an education authority, which published the report Kerend Tij in 2010. Based on this, steps were taken to make the entire education column a lot healthier. Campus Zeeland arose a few years later from the desire to strengthen higher education (university of applied sciences and university college) in Zeeland. It aimed at ensuring a strong link between education, businesses and government bodies, so that more innovation and a strong, future-proof economy is created.

Margriet van Groeningen, who joined the province in 2003, is the programme manager for Campus Zeeland and the labour market at the Province of Zeeland. She is very enthusiastic about what has already been achieved and what is to come in recent years.

The first concrete step to achieve this is the JRCZ, made possible in part by the report ‘Zeeland in stroomversnelling’ in which the need for such a centre is endorsed. “We have invested a great deal of time and energy with all parties involved in the centre’s development. We managed to finalize that, and it was all worth it. What we are realizing here is an important piece of the puzzle in the bigger picture,” says van Groeningen. “The JRCZ and the themes that will be central in it are in keeping with the Zeeland DNA and the spirit of the times. It appeals to young people. They see that these are topics that matter.”

Centre
The programme manager envisions a vibrant centre in which students, lecturers and researchers can work 24/7 on solutions for challenges in the field of water, food and sustainable energy. The building itself should become a meeting point in a green, natural and campus-like environment, stretching from the Markt in Middelburg to the Boulevard in Vlissingen. Whether people must go to the NIOZ in Yerseke, the experimental farm De Rusthoeve in Colijnsplaat or a living lab in the province, they take one of the electric shared campus cars, for example at JRCZ, and if they have to be in the city, they go on foot or with one of the free bicycles.

The building itself has become a landmark. “It sometimes reminds me of the MAS in Antwerp. That is also a place where people go to in Antwerp.” Van Groeningen is convinced that it will not only attract curious visitors, but especially new students and young, highly educated people. This is beneficial for the economy and quality of life in Zeeland. “It sounds poetic, but at JRCZ we are working on a better world. However, it is also good for Zeeland. Other regions are watching this project with interest. They find it very interesting. In that regard, we may well let go of our modesty.” 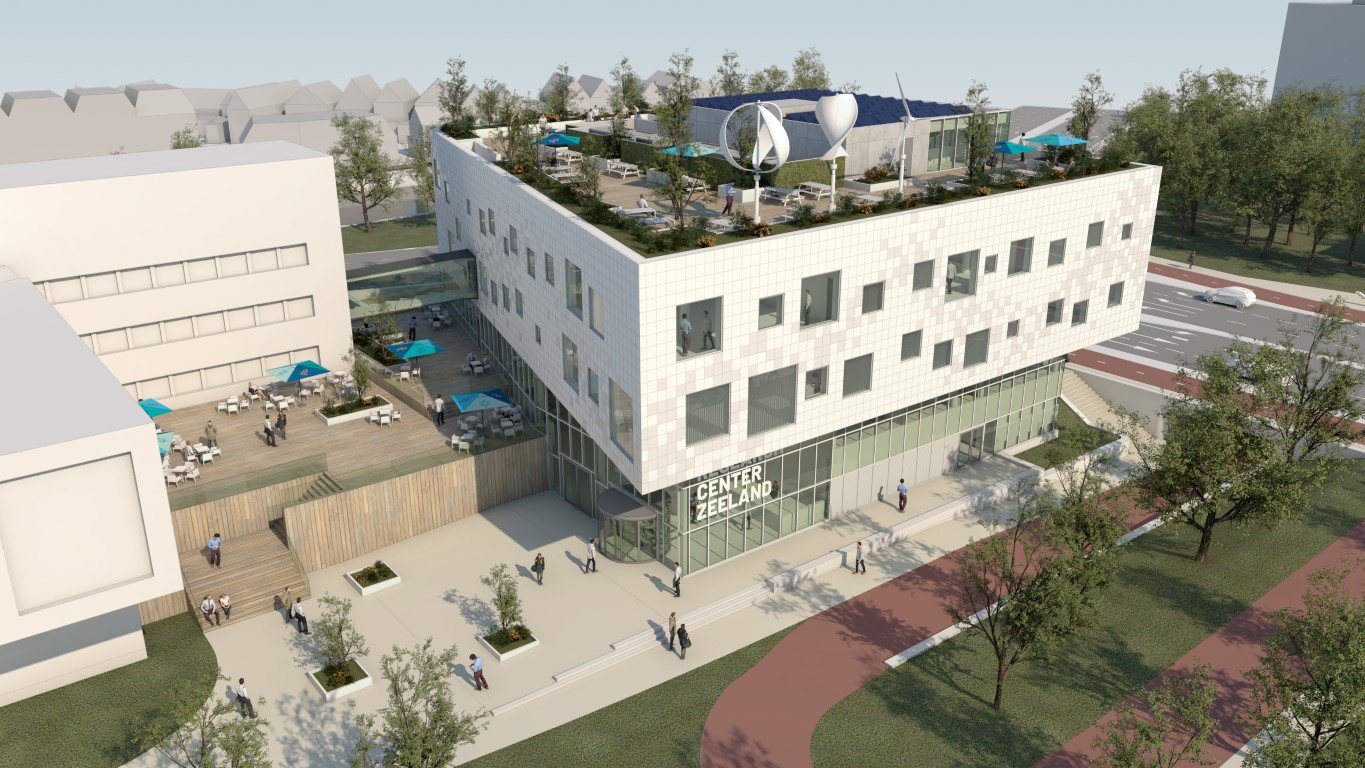 Delta Knowledge Centre
The JRCZ construction is only the first step towards the science campus. The second phase mainly focuses on education: more masters and bachelors at HZ, an engineering department at University College Roosevelt (UCR) and new education programmes at Scalda. The third and final phase is devoted to the Delta Knowledge Centre in which education, research, the business community and governments work together on solutions for the important issues in the delta region. JRCZ is also being prepared for this. Van Groeningen realizes that a lot of work is still ahead before that can happen. “But take stock of what we have now achieved with great enthusiasm and cooperation. You must believe in it. Then we will create something beautiful for Zeeland with united forces.”

Joint Research Center Zeeland is a Campus Zeeland collaboration. HZ is the project leader for the new JCRZ building.

Open and transparent; the Joint Research building is not a black box